Re-routing - Preparing the Walnut for Assembly!

Once the various stringers had been laminated together, the next step would be to rout channels in the wood to add the sheets of maple plywood which would make up the structure of the sides, doors, back, and eventually the playing surface as well. How well the whole table went together would depend on getting these steps right, so a lot of planning went into how we'd not only put the channels into the walnut stringers but what tools would be needed. In the photo below you can see not only some of the components of the build, but a finish tester we're using to try and decide on what sort of final finish we're going to use on the project (as it never hurts to look ahead!).

Walnut is a relatively hardwood (sort of between red oak and cherry), so it isn't going to be as easy to cut deep channels in with a router as say pine or fir. However, before we could start on the actual routing, there were some very important decisions we had to make. 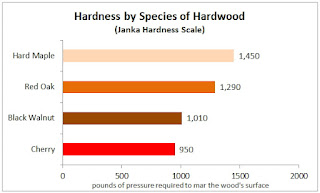 With so many of the sub-assemblies already together, and all of them being made out of high-quality walnut, we had to decide which of the sides were going to ultimately be the front facing parts of the build. This was a little less critical on the stringers as they'd be symmetrical - at least initially - but it made sense to go ahead and mark the pieces so that we wouldn't be second guessing ourselves (or worse, make a mistake) later on! Though the picture below is a little blurry, all of the end stringers below are labeled.

Next we had to decide exactly how to precisely rout the channels into the stringers. Literally every walnut piece in the build would have at least one channel cut into it (with the stringers encapsulating the doors having two). Furthermore, given the hardness of the wood, we wouldn't be able to simply cut the channels to the required depth in one go - it would take multiple passes removing a little material at a time until the desired depth was reached. 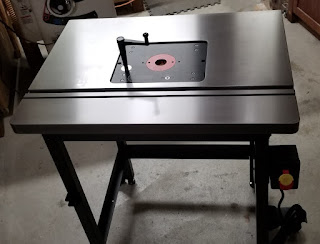 Enter the new router table. This particular one has a chain lift and cast iron top. After spending a fair amount of time first adding a coat of paste wax to the top (to protect it from rust), we spent more time making sure that the lift itself was flat and level with the top of the table. Fortunately my woodworking friend also has a large number of other tools from his time as a classic car racer that allowed us to measure how far off level the table and lift were relative to each other and adjust until it was pretty much dead on. Of course, I can't remember exactly what all the nifty gadgets he had were actually called. 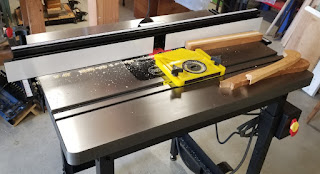 Once the router table was ready to go, we ran a few test cuts with soft wood to make sure that we had the technique down before cutting the actual walnut for the project. Above you can see the first test cut, fence, a feather board (to keep the piece against the fence during the cut), and a couple of push sticks - so that our fleshy hand bits stay well away from the cutting surfaces! 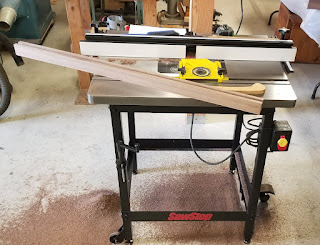 Once we were satisfied that the table was working properly and we had our technique down, we started work on the first stringer. It ended up taking about six passes to get to the depth we needed for the channel based on the desired height of the side. This process, of course, created a great deal of wonderful walnut dust (seen in the photo above) - though later work would make this mountain of dust look truly like a molehill! 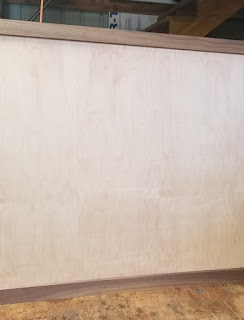 After I had gotten a couple of the stringers together, I couldn't resist the chance of doing a dry fit of the two stringers around the maple plywood side to get essentially a preview of what the side assembly was going to look like. I was not disappointed! The two woods looked wonderful next to each other, and that was without finish! 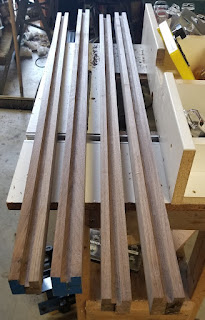 Eventually all four of the end top / bottom stringers were finished. I think they came out great! The new router table as so precise it felt more like a metal milling machine in some ways than a simple woodworking tool. The end results truly speak for themselves. However, this was just the beginning for the routing! Next we will move on to the legs and the cross stringers for the back and doors, which come with their own set of unique challenges!
Posted by Fingolfen at 4:42 PM