Re-routing - Preparing the Walnut for Assembly!

Once the various stringers had been laminated together, the next step would be to rout channels in the wood to add the sheets of maple plywood which would make up the structure of the sides, doors, back, and eventually the playing surface as well. How well the whole table went together would depend on getting these steps right, so a lot of planning went into how we'd not only put the channels into the walnut stringers but what tools would be needed. In the photo below you can see not only some of the components of the build, but a finish tester we're using to try and decide on what sort of final finish we're going to use on the project (as it never hurts to look ahead!).

Read more »
Posted by Fingolfen at 4:42 PM No comments:

Once the legs had been built, it was time to start working on the structural members of the table itself. Each of the sides would require a top and bottom rail to simultaneously enclose the plywood side and serve as a platform for additional internal structures (oooh - foreshadowing). The table also needed four primary beams to span the length of the table forming the top and bottom of the back and the top and bottom rails of the sliding doors. As all of these would need to be relatively thick, we decided rather than trying to get walnut in the right thickness (which would be both expensive and susceptible to warping) we would laminate thinner boards together to provide not only additional strength, but lessen the tendency of the long boards to warp with changes in temperature and moisture.

Getting a Leg Up - First Steps Toward a Gaming Table

With the decision made to go ahead and try to build my own version of the Geek Chic Spartan Table, step one was to reverse engineer the plans and layout of the original as much as possible. The Geek Chic site was down (and has since been taken over by malware cyber-squatters - don't go there!), but some versions of the PDF brochures could still be found along with a few photos and videos posted by the lucky few to actually receive a table. The first decision I made was not to do an exact copy of the Spartan, but rather to make a couple of modifications I thought would make the table more user-friendly. In the original Spartan design, there was a shelf which covered the entire bottom of the table (and essentially served as a key structural piece). This means that no one could sit next to the table itself in a chair as they would either be resting their feet on the maple (bad idea) or would simply have to be back from the table at all times. This would be okay if the rail system was in use 100% of the time with attachments, but as I figured that would most likely not be the case, I decided to push back that cross member to be even with the doors (and the back plate on the opposite side). 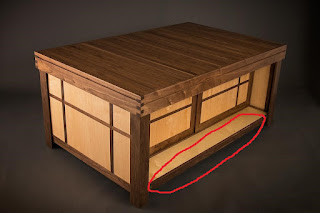 Bespoke Gaming Tables - or - What Have I Gotten Myself Into!?!!??

As a card-carrying member of Gen X, I was on the leading edge of roleplaying games and large-scale organized wargames. While miniature wargaming had been around for decades, the genre saw a dramatic increase in popularity during the 1980s and 1990s with the release of Warhammer and Warhammer 40K. As a student in both graduate and undergraduate school, you tended to play your games where ever you could find space: kitchen tables, card (AKA "poker") tables, pretty much anything with an open flat surface was fair game. If you were really lucky you made it to the occasional tournament with modular tables and terrain. Fast forward several years, and gaming as an industry has taken off. Those starving Gen X college students are now often professionals with far more disposable income. So in addition to more games being available, new places to actually play your games started to make it to market. 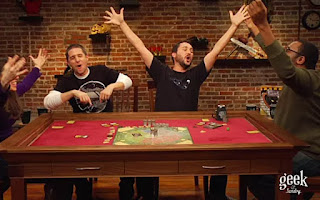 I'm not dead! No really!
It has been a (long) while since I've posted as there has been quite a bit going on in my life. I transitioned to a new job for the first time in over 20 years earlier this year. The interview process and transition took up a fair amount of my time, which limited time for working on hobbies. My Necron army was also just not holding my attention like I'd hoped, and while I loved the paint jobs on my Skinks, the basing left a lot to be desired in my book. So I've effectively deprioritized both of those armies for the time being. I'm making progress on some additional basing elements for both armies that I think will help eventually move them forward, but on the Necrons I also need to find a way to improve throughput on energy blades.
I've also been indulging in another hobby, which is building effects pedals for my guitar - I have even recently set up a separate blog showing off some of the recent ones I've put together. Given most of the U.S. is still effectively locked down, actually playing 40K or AoS remains an elusive concept, but new effects pedals I can put to immediate use in chasing the sound of some of my guitar heroes.
I'd thought about trying to update my Armies on Parade entry from last year with some of the newer Cult miniatures I'd worked on earlier in the year, but the format is "online" once again this year. Last year's "competition" sort of left a bad taste in my mouth. I'd tried to enter both my son and myself, and I'm not even sure if my entry was accepted even after hundreds of hours of work. Very few of the thousands of entries got a shout out, and there was no Youngblood category. So, I decided to just skip it this year and save my sanity.
That being said I do have a few miniatures projects that are making their way back onto the table. I have several Cult miniatures that I'm hoping to finish up before the end of the year, and I have a new army that I believe I'm going to get to come out visually the way I want it. It will likely be several weeks before they're ready to post, but they will make an appearance here first!

Posted by Fingolfen at 8:09 PM No comments:

Necron Gandalf - or Kamoteph the Crooked

For this year's Store Anniversary miniatures, Games Workshop had one new Necron for Warhammer 40K and a Stormcast Eternal for Age of Sigmar. I'd thought about picking up one of the Stormcast's for my son, but he seemed ambivalent about it, so I ended up just getting one of the Necrons for my new Necron force. Kamoteph the Crooked is just a vanilla Cryptek with no special rules, which is sort of nice because he will always slot nicely into any Necron army and won't become a "legend" - losing all official support. I really liked the look of the miniature - he's absolutely ancient even by Necron standards and has that whole "get off my lawn" vibe about him. 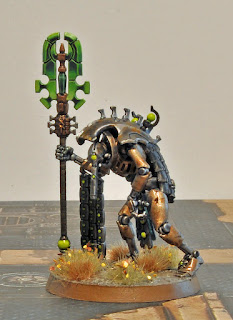 Read more »
Posted by Fingolfen at 9:48 AM No comments:

I just put the finishing touches on my Chimera Su-76 conversion and I'm extremely happy with how it turned out. The only thing missing at this point is the crew and the radio antenna. I wasn't able to finish up the crew because I'm missing a couple of arms that I need, and I wasn't able to finish up the radio antenna because I can't find my piano wire (and I'm not sacrificing any guitar strings at this point!). So without further ado, on to the photos! 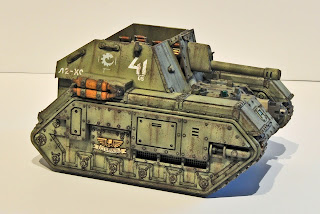